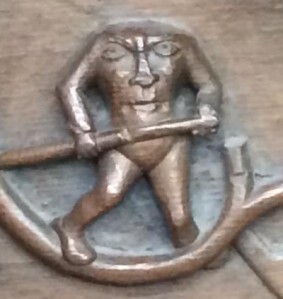 “And in another isle toward the south dwell folk of foul stature and of cursed kind that have no heads. And their eyes be in their shoulders.” – Sir John Mandeville (14th c.)

It’s funny how myths and legends become a part of history. This column – Debunking the Myths – is devoted to exploring the many false rumors, tales, and impressions that have embedded themselves into our modern perception of Richard III and his times.  Join us, as we hunt down the Loch Ness monsters, Sasquatches, and Blemyae that have roamed the Ricardian historical landscape for centuries.  No need to bring a weapon.  Just bring an open mind!

Today’s blog is about the infamous lampoon posted on the doors of London’s St. Paul’s Cathedral in July 1484, during the second year of Richard III’s reign.  Even the casual reader of Ricardian history can recite it from memory:

“The Cat, the Rat, and Lovel our Dogge,
Ruleth all Englande under a Hogge.”

While not mentioning the King and his councilors by name, the lampoon references their well-known heraldic badges, describing Richard III’s white boar device as a “hogge”.  Conventional history tells us that Richard III, being insecure on his throne, was so incensed and threatened by lampoons of this nature that he indicted its author – William Collingbourne – for high treason.  The penalty paid by Collingbourne was severe.  He was hanged, castrated and disemboweled, and there is a poetic account that he was heard to say “oh Lord Jesus, yet more trouble!” as his bowels were ripped from his body.  The effect that ripples from this incident is the perception that Richard III was a petty, paranoid and tyrannical man who brooked no tolerance for political free speech.

But, hold on a second.  There’s a couple of important facts that are missing from this historical Blemyah.  The first of them is that Collingbourne was not brought up on charges of high treason until October or November, 1484, more than three months after the doggerel was posted.  As written by Kenneth Hillier, “On 29 November a commission of oyer and terminer was set up; it included the Dukes of Suffolk and Norfolk; the Earls of Nottingham and Surrey; Viscounts Lovell and Lisle, and others ‘touching certain treasons and offences’ committed by ‘William Colyngbourne late of Lydeyard co. Wilts esquire, and John Turburvyle late of Fyremayne, co. Dorset, esquire’.” 1  If the offense forming the basis of the indictment was the poem, why would the King delay the prosecution?  Surely, speech that countenanced the death of the King, or diminished his regality by exciting the people against him, was a sufficient and well-settled basis to bring immediate charges.  So why did the King wait?

It turns out that Collingbourne was, in fact, plotting for the overthrow of Richard III and the evidence of this probably did not emerge until after the lampoon was posted.  According to James Gairdner’s RICHARD III biography, the charge against him was that he, amongst others, offered a certain Thomas Yate a sum of money to go over to Brittany to Henry Tudor, Earl of Richmond, and his adherents, Dorset, Cheyney, and others, and

“To declare unto them that they should do very well to return into England with all such power as they might get before the feast of St. Luke the Evangelist next ensuing [October 18]; for so they might receive all the revenues of the realm due at the feast of St. Michael [September 29] next before the feast of St. Luke.  And that if the said Earl of Richmond with his part-takers, following the counsel of the said Colyngbourne, would arrive at the haven of Poole in Dorsetshire, he the said Colyngbourne and other his associates would cause the people to rise in arms and to levy war against King Richard, taking part with the said earl and his friends, so that all things should be at their commandments.  Moreover, to move the said earl to send the said John Cheyney unto the French king to advertise him that his ambassadors sent into England should be dallied with, only to drive off the time till the winter season were past, and that then in the beginning of summer King Richard meant to make war into France, invading that realm with all puissance; and so by this means to persuade the French king to aid the Earl of Richmond and his part-takers in their quarrel against King Richard.” 2

Collingbourne was tried before peers of the realm, mentioned above, at the Guildhall in London in December.  It is difficult to imagine a more serious charge, which included not only giving counsel to Henry Tudor as to the optimal time and place to make his invasion, but also conspiring with the French King to give assistance to Tudor’s effort!  According to some scholars, what motivated Collingbourne to plot against Richard III was the fact that he had lost some offices that he had held previously, including one in service to the King’s mother.  Also, as mentioned by Mr. Hillier, Collingbourne’s home in Wiltshire had “always been notoriously Lancastrian, and it was one of the centres of the 1483 uprising” suggesting that he was also involved in Buckingham’s earlier rebellion.  In other words, Collingbourne was something of a known enemy of the state.

Lastly, what are we to make of the notion that Richard III was so insecure on his throne that even lampoons like Collingbourne’s threw him into a state of high panic?  In all honesty, I never thought the poem was all that subversive; it merely names the King and his men by their well-known badges, although calling Richard’s boar a “hogge” was certainly intended to give offense.  However, we have to cast off our modern notions of free speech, and confront the fact that earlier English kings – even those who were very secure on their throne – did not countenance attacks on their regality.  This is abundantly clear in the treason indictments made against two commoners, Thomas Gate and Harry Mase, during the reign of Henry VI. 3  Both made statements – in taverns of all places – that mocked his newly-minted Noble coin which showed the King as commander of the “ship of state”.  Gate and Mase said Henry VI did not deserve to be called a ship’s commander but rather a sheep, not only because of his passivity and deference to overweening lords, but also because he was losing the lands that his father, Henry V, had so gloriously won in France.  Gate and Mase made their statements in the 1440s, well before there was a Yorkist challenge to the Lancastrian claim to the throne, and well before the first conflict of the Wars of the Roses at St. Albans in 1455.

And yet, notwithstanding the above, the historian Edward Hall (1497–1547), in his chronicle UNION OF THE TWO ILLUSTRE FAMILIES OF LANCASTER AND YORK, accuses Richard III of executing Collingbourne merely “for making a small rhyme“, an accusation repeated by subsequent historians.  Somehow they forgot some details.  See how easy it is to create a myth?

What do you think?  Was Richard III being overly paranoid and tyrannical by indicting Collingbourne?  Was the English public unaccustomed to such heavy-handedness by the King, and thus becoming disenchanted with his rule? Are there other historical myths and Blemyae that you’re aware of and think should be debunked?  Share your thoughts and ideas in the Comments below!

For an interesting discussion about the concept of high treason, check out Annette Carson’s book RICHARD DUKE OF GLOUCESTER AS LORD PROTECTOR AND HIGH CONSTABLE OF ENGLAND, pp. 27-33 (2015).