Richard III fascinates people because his story has so many profound mysteries.  Take, for instance, the case of the disappeared Princes in the Tower.  Or the execution of William, Lord Hastings.  These two events have filled up hundreds of pages of speculation in books, have spawned endless social media threads, and remain the subject of heated debates in historical societies.  They’re like the two giant elephants in the room whenever the topic of Richard III crops up.

Nevertheless, there are certain facts that are known about Richard.  One of those is that he adopted the White Boar as his personal badge while he was Duke of Gloucester, a title given to him at age 9.  We don’t know exactly when he adopted it, but it would be reasonable to assume that he would have had to pick a badge (or several) as soon as he was retaining men into his affinity and given the task of arraying troops. The earliest known account of Richard retaining men is contained in the Paston Letters, which observe him recruiting men into his affinity in June 1469, during the Robin of Redesdale crisis.  At that point, Richard was almost 17 years old.  Certainly, there is no question the White Boar became his most prominent badge by age 23 at the time of Edward IV’s 1475 invasion of France; Richard’s men are clearly identified by it in the list of troops summoned for the campaign.

But where did Richard draw inspiration for choosing the White Boar?  The traditional explanation is that the medieval spelling for boar (“bore”) was an anagram for the Latin word for York (“Ebor” or “Eboracum”), his royal house.  In my article “The Fotheringhay Boar(s)”, published by the Richard III Society in their Ricardian Bulletin, I offered a theory that Richard first saw carvings of boars at the church of St Mary and All Saints in Fotheringhay, where he was born and lived until age 6 or so.  St Mary’s was intended to be a mausoleum for his family, and already housed the tomb of his uncle who died at Agincourt.  Here is a photograph I took of a misericord that was in situ at St Mary’s at the time of Richard’s birth and prompted my theory1: 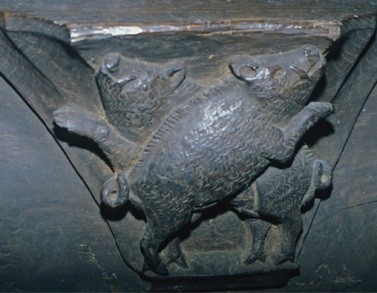 Yet, on reflection, after I wrote that article, I was not content to think that these boars would have provided him with sufficient inspiration to select his badge.  They were too bucolic, and were more in line with what wood carvers were doing in other church parishes and cathedrals to represent the cycle of life, when the season of pawnage (September) came about and common swineherds were allowed into royal forests to feed their pigs on acorns and other foraged items.  You see this theme repeated in other churches throughout England, without any reference to heraldry or family badges.

Delving deeper into this mystery, I ran across another candidate:  the Taymouth Book of Hours. It was created in London, during the reign of Edward III, and is now considered one of the most famous manuscripts of its period. It is elaborately decorated with scenes from the Bible, the lives of saints, bestiaries, legends, and tales of chivalry.

There are many theories about who first owned it. Possibly it was Edward III’s queen, his mother, or one of his sisters.  The book ended up in Scotland in the 16th century, and then came into the possession of the earl of Breadalbane of Taymouth Castle during the late 17th century (hence its name). However, there is indisputable evidence that it had been in the possession of the Neville family, particularly the Nevilles of Raby, in the 15th century. This is proven by this page: 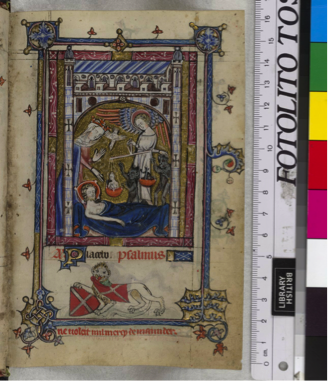 Here, we have a miniature of the Virgin Mary interceding on behalf of a dying man, with St Michael holding scales and two devils vying for his soul. At the bottom of the page there is a lion holding a shield of arms Gules a Saltire Argent (red background with a white saltire), which is repeated elsewhere in the book.  Those arms, according to my correspondence with Windsor Herald at the Royal College of Arms, belong to none other than Ralph Neville, first Earl of Westmorland – the father of Cecily Neville and, thus, Richard III’s grandfather.

It would be safe to say that the Taymouth Hours would have been a very expensive book to acquire or an extremely generous gift.  It is richly decorated and would be exactly the type of thing that a wealthy nobleman would want in his library collection, especially given its royal provenance.  And, with its depictions of gallant heroes, “wild wood men”, and scenes of women hunting on horseback, it would have been a popular book in any household, for young viewers in particular. Inserting one’s coat of arms into an illuminated manuscript was one of the ways people showed ownership.

But where did it go after being in the possession of the first Earl of Westmorland?  He had 22 children by two wives, the first being Margaret Stafford and the second being Joan Beaufort.  Well, in a rather inexplicable turn of events, he dispossessed the heirs of his first wife, leaving their oldest surviving male heir practically nothing but the title, and settled the bulk of his estates and possessions on the children of his second wife.  The one who ended up benefiting from this legacy was Richard Neville, fifth Earl of Salisbury, the father of the notorious Kingmaker.

That the Taymouth Hours was owned by a Neville brings it in close proximity to Richard III’s life.  His mother owned several religious texts, and of course, her arms would have been the same as her father’s until she married the Duke of York, so the arms we see above could actually be her’s.  Alternatively, her nephew, the Kingmaker, could have acquired it from his father and kept it at his principal castle of Middleham, where Richard lived as a ward from age 13-16.  And it’s also conceivable that George Neville, the Kingmaker’s brother and an enthusiastic collector of books, could have possessed it.  Richard was reported to have attended George’s enthronement as archbishop of York at his residence of Cawood castle.  Could Richard have seen the Taymouth Hours by any of these close associations with the Nevilles?  I believe it’s well within the realm of possibility.

However, there is one piece of evidence that is hard to ignore, and perhaps this tips the scale further towards probability.  And that is the illustration shown on this page: 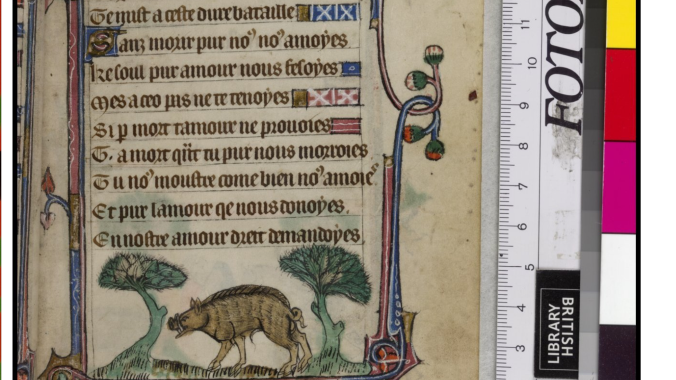 This is an illustration within a series of bas-de-page images telling the legend of Guy of Warwick. The tale was enormously popular in the late medieval period, and involved a story of a great boar “of passing might and strength”. The hero – Guy – is a lowly squire who has fallen in love with the high-born Felice. In order to win her heart and hand in marriage, he must go on a quest and defeat multiple enemies including slaying a dragon and killing the boar depicted here. We know that Richard enjoyed such stories of romance and chivalry: he signed his name at the bottom of a manuscript telling the legend of Ipomedon, which also involves a knight who must prove his worth and valor in order to win the hand of his lady.

What is striking is the similarity between the boar illustrated on this page with Richard’s boar badges found on the foreshore of the Thames River in in London and at the Bosworth Battlefield:

When we combine the Neville provenance, Richard’s known connections to that family, and his explicit enjoyment of chivalric tales, it is difficult to discount the Taymouth Hours as being one of the sources of his famous boar badge.