My morning ritual involves making a pot of coffee: I can’t function without it! Normally, I don’t connect Richard III with the process of brewing a pot of Joe, but today, I happened to reach for a coffee mug that I’d received as a gift upon graduating from law school in 1993. I laughed to myself, because it was emblazoned with the quote “Kill all the lawyers” and it attributed that statement to King Richard. My friends obviously had a wicked sense of humor in giving me the mug, but they didn’t know it was doubly relevant to me, both as a lawyer and a history buff with a fascination for that monarch. 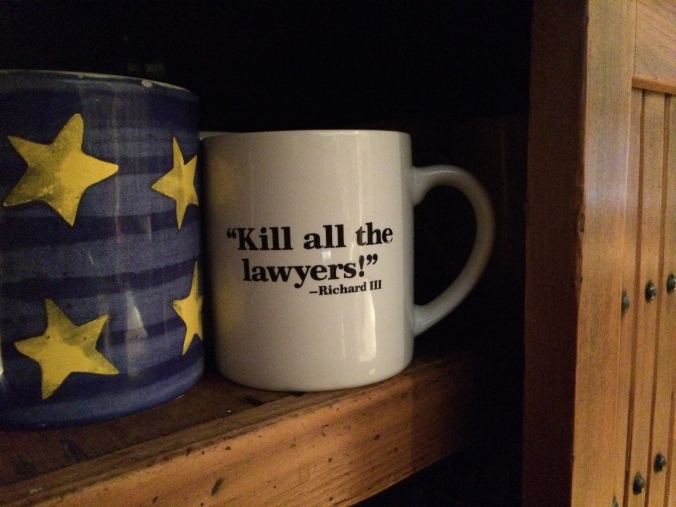 Twenty years later, I was attending a continuing legal education course on advanced trial techniques, and – much to my surprise – the lecturer brought up the “Kill all the lawyers” quote.   It was in the context of how trial lawyers had to navigate the unfounded assumptions, biases and beliefs that judges, jurors, witnesses and the public brought into the justice system. He asked the audience if anyone knew who said it. A few hands shot up, and someone shouted “Richard III!”

The lecturer responded, “Now, see, even in this highly educated group, we have a popular misconception. It was not Richard III, but a character from Shakespeare.  Does anyone know which one?”

It was the only time I’d ever raised my hand at a continuing legal education course, and was probably one of my proudest moments as a Ricardian. Here, I finally had a chance to correct a common misperception about King Richard!

The common belief shown by my colleagues actually involves a triple myth as to the quote’s origin, its speaker, and its meaning. Despite what my mug said, Richard III never uttered these words, although you sometimes encounter people who think he did.  If anything, the public statutes propounded in Richard’s 1484 Parliament show a reformist approach to the legal system.  They have been hailed by the likes of Francis Bacon as beneficial “for the ease and solace of the common people” and University of Oxford’s Professor of Law H.G. Hanbury observed the king was “a singularly thoughtful and enlightened legislator, who brought to his task a profound knowledge of the nature of contemporary problems, and an enthusiastic determination to solve them in the best possible way, in the interests of every class of his subjects”.  Nowhere did Richard III ever express a grudge against lawyers nor a desire for their wholesale murder.  In fact, one of Richard’s closest advisers was a lawyer himself:  William “the Cat” Catesby.

When you do meet someone who knows that they come from one of Shakespeare’s plays, it is more often than not that they think they were uttered by the delightfully villainous character of Richard in the Bard’s The Tragedy of Richard III.  Nope. They come from Henry VI, Part Two, and are probably the only memorable words from all three parts of the Henry VI play cycle. The speaker is a very minor character, simply called “Dick” or “Dick the butcher” and are said in the following exchange from Act 4, scene 2:

All:
God save your majesty!

Jack Cade:
I thank you, good people—there shall be no money; all shall eat
and drink on my score, and I will apparel them all in one livery,
that they may agree like brothers, and worship me their lord.

Dick:
The first thing we do, let’s kill all the lawyers.

This exchange is part of a dramatization of an actual event called “Cade’s Rebellion” that occurred in 1450 – two years before the birth of the future Richard III.   Although he has an entry in The Oxford Dictionary of National Biography, the real Jack Cade is something of a shadowy man, born sometime in 1420-1430, possibly in Ireland or Sussex. After serving in the French Wars, he returned to live in Kent and married a lady of good standing. On the 3rd of July, 1450, Cade – using the sobriquet “Jack Mortimer” – led a large group of rebels into London. Their grievances were directed at the misadministration of government under Henry VI and his inner circle of favorite courtiers. They pointed to abuses in the judicial system, corrupt officials, the king’s insolvency, the seizure of land by nobles, heavy taxation and the loss of Normandy to France. Despite the loftiness of their stated grievances, Cade and his followers soon fell to looting, violence and burning property. Cade was mortally wounded as he tried to flee England with his booty, and when his corpse was returned to London, it was given a traitor’s treatment – beheaded, drawn and quartered.

This brings me to the third misunderstanding about the “kill all the lawyers” quote. Many view it as a jab at the legal profession, along the lines of “dead lawyer” jokes told in countless pubs. Because of the complexity of legal process, its expense, and the abstruse lingo used by attorneys, there is some truth to the sentiment that society would be simpler – and better — with fewer lawyers. However, this ignores the farcical nature of Shakespeare’s Jack Cade and his supporters in the above-quoted scene. Jack Cade has declared himself autocrat, another king, and almost like today’s populist politicians, he makes promises that are ridiculously impractical and can only be believed by the most gullible (such as “there shall be no money”). Retired U.S. Supreme Court Justice John Paul Stevens once chimed in with, literally, his own opinion. “As a careful reading of that text will reveal, Shakespeare insightfully realized that disposing of lawyers is a step in the direction of a totalitarian form of government,” he wrote in a footnote to a dissenting opinion from a 1985 case.

James Shapiro, an English and comparative literature professor at Columbia University who has written several books about the Bard and his plays, said it could be argued that Shakespeare was tapping into fears of insurrection and civil unrest among the noble classes. But, he observed, the proliferation of lawyers also generated resentment among commoners who couldn’t afford them and viewed them as aligned with the powerful elite. Ironically, we wouldn’t know much about the “real” Shakespeare without the legal world. According to Professor Shapiro, much of what we know about the playwright comes from legal records, including lawsuits he brought to recover debts and his last will and testament. So, kill the lawyers, but don’t kill Shakespeare’s!

To read more about the controversy over this infamous quotation, as well as the proliferation of “Kill all the lawyers” paraphernalia and merchandise, check out:

Jacob Gershman, “To Kill or Not To Kill All the Lawyers? That is the Question,” Wall Street Journal, August 18, 2014.